Titolo: A screen showing men and women as they o 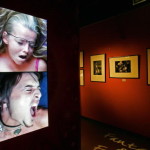