Descrizione: WELLS, UNITED KINGDOM - JANUARY 23: Snow covered sheep are seen in a field off the B3139 near to the village of West Horrington, near Wells on January 23, 2013 in Somerset, England. Parts of the UK, including the Mendips in Somerset, were hit by more snow last night causing further disruption and leading to a number of schools to close. (Photo by Matt Cardy/Getty Images) 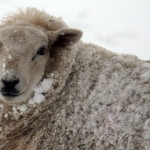