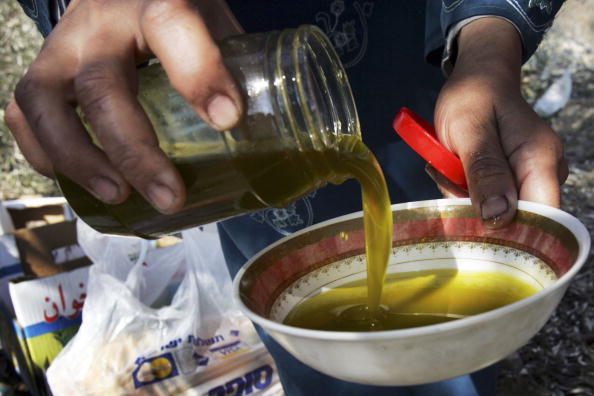 Descrizione: JIT, WEST BANK - OCTOBER 30: Palestinian woman Amna a-Sakhen prepares a harvest meal, including a bowl of fresh olive oil, for her family and for Israeli human rights activists who are helping them harvest olives in a grove October 30, 2006 between her family's village of Jit and the militant Israeli settlers' outpost of Havat Gilad in the West Bank. Several hundred Israeli volunteers are helping Palestinians all over the West Bank harvest their olives at the height of the season, in the belief that their presence deters the worst excesses of radical violence from militant right-wing settlers. Right-wing settlers have cut down and burnt groves, attacked farmers and stolen olives in recent years. (Photo by David Silverman/Getty Images)