Descrizione: BARCELONA, SPAIN - JUNE 22: A customer buys vegetables with Euro banknotes at a fruit and vegetables stand at the 'La Boqueria' fresh market on June 22, 2011 in Barcelona, Spain. Eurozone finance ministers are currently seeking to find a solution to Greece's pressing debt problems, including the prospect of the country's inability to meet its financial obligations unless it gets a fresh, multi-billion Euro loan by July 1. Greece's increasing tilt towards bankruptcy is rattling worldwide financial markets, and leading economists warn that bankruptcy would endanger the stability of the Euro and have dire global consequences. (Photo by David Ramos/Getty Images) 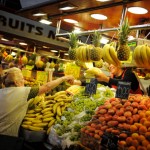