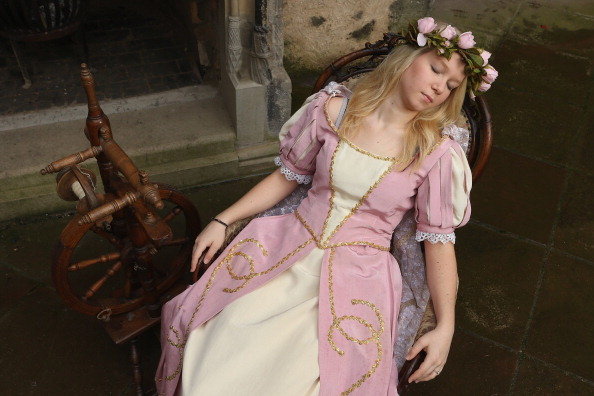 Descrizione: HOFGEISMAR, GERMANY - NOVEMBER 18: Sleeping Beauty, played by actress Elisabeth Knoche, reclines in her 100-year sleep after she pricked her finger on a spindle at Sababurg Palace on November 18, 2012 near Hofgeismar, Germany. Sleeping Beauty (in German: Dornroeschen) is one of the many stories featured in the collection of fairy tales collected by the Grimm brothers, and the 200th anniversary of the first publication of the stories will take place this coming December 20th. Elisabeth and another actor perform a skit based on the Sleeping Beauty tale to visitors during the summer months at Sababurg, which is now a hotel called Dornroeschenschloss Sababurg and is located along the "Fairy Tale Road" ("Maerchenstrasse") from where many of the tales derive. The Grimm brothers collected their stories from oral traditions in the region between Frankfurt and Bremen in the early 19th century, and the works include such global classics as Rapunzel, Little Red Riding Hood, The Pied Piper of Hamelin, Cinderella and Hansel and Gretel. (Photo by Sean Gallup/Getty Images) 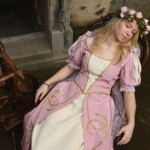